The first few weeks over the speakers we would hear Mr. Garibaldi, HPHS Principal, pressing the matter of dress code to the students, reminding them of what’s allowed and what isn’t allowed. Even with those reminders, dress code infractions were still happening and after a while, it had just seemed that the dress code was non-existent. 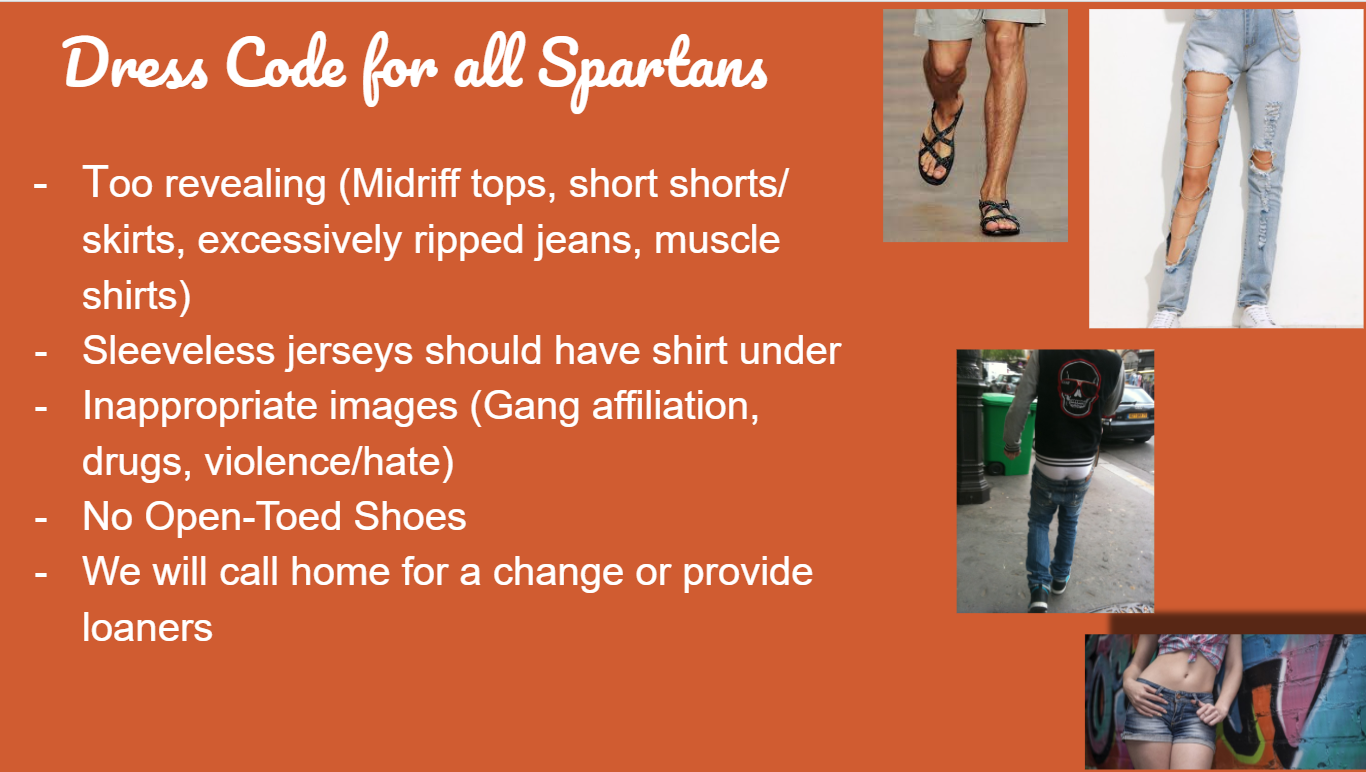 As seen above, the dress code is very vague and doesn’t have any specifications about anything except for the fact that open-toed shoes aren’t allowed on campus. When interviewing administrators, both Mr. Garibaldi and Ms. Lombarski, assistant principal at HPHS, referenced the LAUSD dress code bulletin and said that our dress code is a direct paraphrase of that.

Mr. Garibaldi explains that even if the school created a dress code with more specific and strict rules if a parent comes in with a complaint about the dress code or challenges the dress code, it goes back to the district dress code rather than the school’s actual dress code.

Mr.Garibaldi addresses that the enforcement of the dress code hasn’t stopped, it’s just that dress code infractions have occurred less often now that students are more mindful of what’s school appropriate and what isn’t. Not only that, the process of getting students and staff tested weekly for COVID-19, identifying and informing those with positive cases, doing contact tracing and all other COVID-19 protocols have relieved some of the stress on the way students dress.

When asked about whether there’s a consequence for breaking the school dress code, Mr. Garibaldi and Ms. Lombarski both stated that it was more of a corrective action rather than a consequence. When asked about measures that would be taken if a student were to break the dress code, Mr. Garibaldi responded with, “Say, for example, somebody comes in with shoes, not with the dress code policy, we usually have them call the parent, go to the nurse’s office but we’re not using the nurse’s because of the COVID situation, so we’ve been doing the attendance office, and we contact the parents to please bring them something that would be more appropriate under the dress code policy.” Students are held in the attendance office until either parents’ who have been called bring a change of shoes or clothes or students change into more appropriate clothing (by using loaner shirts) and/or footwear. If parents’ cannot bring a change in clothing or footwear, the student violating the dress code will have to stay in the attendance office until the end of the school day. As far as classwork, Garibaldi stated that students would have to have their work brought to them and complete it while they’re in the attendance office.

Challenges about how sports uniforms may violate the dress code are in a way invalid due to that being out of the school’s control. “That’s a uniform, an athletic uniform, that the district purchases and funds. So, if the district is going to mandate something, then they have to fund it. That’s why now uniforms are funded by the district and some of it is because of safety and performance.” (Mr.Garibaldi)

The school’s and district’s priority with dress code is safety. “The student dress code components must be necessary for the health and safety of the school environment.” TITLE: (lausd.net). During the interviews with the administration, they both stressed safety. Safety is the only reason that schools should have a dress code and everything on the dress code should be there solely for the student’s safety. Items such as open-toed shoes and gangs, drugs, or anything related to causing harm shall not be permitted on school grounds due to it risking the safety you have at school.
It’s very difficult for administration and staff to go about dress-coding students and to just understand what the dress code is in general. The dress code was never public or set in stone, but as the year progresses, we hope to see change at Huntington Park High School and hope that students and staff get educated clearly on just what the dress code is here for our Spartans at Huntington Park High School.

“Once again, I think if I were to share something about the dress code; number one: it goes back to safety. Number two: there are grey areas that are very difficult to address,… …I think we can make it more public. So once again just to recap: review it with our staff, update leadership, and have them help us try to get the word out on this… navigate those grey areas as best we can, and once again, the whole dress code policy is about safety.” – Mr. Garibaldi, HPHS